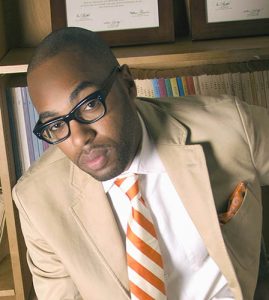 Dr. Emdin, Professor of Science Education, Author, and Minorities in Energy Ambassador for the Department of Energy

Dr. Emdin holds a Ph.D. in Urban Education with a concentration in Mathematics, Science and Technology, a M.S. in Natural Sciences, and Bachelors degrees in Physical Anthropology, Biology, and Chemistry.

Professor Emdin was also selected as a STEM Access Champion of Change by the White House, and currently serves as Minorities in Energy Ambassador for the United States Department of Energy.

Dr. Emdin is also listed on the ROOT100 list of most influential African Americans in the fields of business, science, politics, technology, social justice, sports and entertainment.

He is founder of the #HipHopEd movement, and the author of the award winning book, Urban Science Education for the Hip-Hop Generation, and the New York Times bestseller, For White Folks Who Teach In The Hood...and the Rest of Ya'll Too.

Some of the topics he'll be discussing include:
• The Crisis of Urban Education
• Teaching & Learning from the Student's Standpoint
• Hip-Hop & Education
• Rethinking STEM

Don't miss this exciting speaker and register today!  We look forward to seeing you next week.