On Friday, January 5th, TCSA submitted an Amici Curiae brief in support of the charter school petitioners in the case currently before the Texas Supreme Court challenging the constitutionality of the revocation procedures for charter revocations under the state’s “three strikes” law enacted by Senate Bill 2 of the 83rd Texas Legislature. Prepared on behalf of TCSA by Tommy Fuller of the Fuller Law Group, TCSA argued in support of the charter petitioners that the Commissioner did not provide the charter holders with any meaningful due process, as required by the Texas Constitution. TCSA highlighted for the high court that not once in the arc from the first negative performance rating to final revocation by the Commissioner and review by SOAH are the charter holders provided meaningful due process.  In particular, TCSA argued that the Court of Appeals erred in finding due process in the revocation procedures, as there is,  is no meaningful opportunity for the charter holder at the performance rating level (the Commissioner limits review to data or calculation errors on behalf of TEA or the Commissioner), and that the review of the Commissioner’s revocation decision by the State Office of Administrative Hearings (SOAH) should have included a review of the underlying evidence.  The Texas Supreme Court heard oral argument on the case on Wednesday, January 10, 2018.  The high court could issue a decision at any time, as it does not have any particular deadline by which to issue a decision in the matter. Stay tuned for this very important decision regarding charter school revocations and due process rights!

Monday, December 7th, the Senate Education Committee held an interim hearing to consider testimony on the implementation of SB 2 from the 83rd Legislative Session, the disposition of state property, and charter school facility funding. Interim hearings are held during a legislative interim for legislative committees to hear testimony on specific issues identified by either the Lieutenant Governor or Speaker of the House. There are no specific bills or proposals that are considered during this time; it is more of a research period for the legislative committees with the goal of the committee developing policy recommendations to take into the legislative session.

Those present to testify at the hearing on behalf of the charter school movement included: TCSA’s Executive Director, David Dunn, Jennifer Goodman, Superintendent of Odyssey Academy, John Murphy, CFO for KIPP Houston, Kathleen Zimmerman, Executive Director of NYOS, and Kalese Whitehurst, Chief of Staff with Responsive Education Solutions. Russ Simnick with the National Alliance for Public Charter Schools also attended to present testimony as to how other states fund charter school facilities. One of two topics that day, the charter school issues took longer than one may have guessed for an interim hearing – about five hours!  The length of time it took was a good sign as it showed that the members of the Senate Education Committee were actively engaged in our issues, listening to testimony and asking many insightful questions. 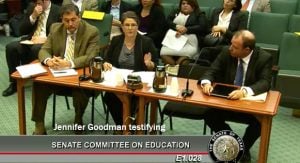 Testimony during the hearing spoke to how SB 2 has fundamentally changed the way Texas approves, expands, and revokes charters. TCSA pointed out that we continue to strongly support SB 2, however while the state has moved to implement SB 2 in regards to revocations, the state has not moved with equal vigor to implement the other provisions in SB 2 which allow for the expedited expansion of effective existing charter schools as well as the ability to grant new charters to proven models. Effort needs to be made to speed the expansion of charter schools to meet the large student waiting lists.

Those that testified to the disposition of state property issue all agreed that the issue is complex as there are several interests at play when a charter holder ceases to exist. All agreed that the critical issue must be studied carefully or else we jeopardize the ability of all charter schools to secure affordable financing for facilities. 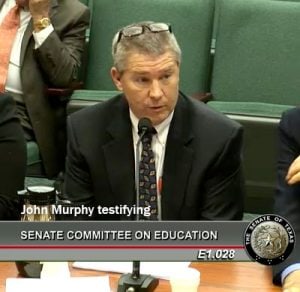 The interim hearing was a window into the next legislative session. There will be much work to do and much ground to cover. We have strong support, but we also have the challenge of strong detractors. With everyone organized and speaking with one voice we will meet the challenge of passing sound and effective public policy that supports the charter school movement in Texas. TCSA looks forward to continuing to work with our membership, legislators, and other stakeholders to meet the needs of charter school students in Texas.

An appellate court in Austin on Thursday, September 24, heard arguments from three open-enrollment charter schools on the constitutionality of Texas Education Code Section 12.115(c-1), an automatic revocation provision in Senate Bill 2 passed by the Legislature in 2013. Even though Senate Bill 2 did not become effective until September 1, 2013, Section 12.115(c-1) directed the Commissioner of Education to revoke open-enrollment charter schools based on their academic and financial performance in prior school years.

They pressed arguments that Section 12.115(c-1) is unconstitutionally retroactive, that the Texas Education Agency denied procedural due process in its implementation of the new law, and that the TEA improperly considered the performance of Honors Academy high school for the 2011-2012 school year.

All three schools had persuaded a Travis County District Court to enjoin the agency’s revocation process against them, but the State of Texas appealed the district court’s ruling in June 2014, setting up for yesterday’s oral arguments before the Third Court of Appeals.

Attorney Kevin O’Hanlon represented Honors Academy Charter School. O'Hanlon said, “The Court was prepared and understood the matters at issue in the case. They appeared to be receptive to consideration of all constitutional as well as the statutory interpretation issues.”

The outcome of the case is uncertain, but all of the attorneys representing the charter schools were optimistic after the argument.

Attorney Susan Morrison, who represents Azleway Charter School, said she was most surprised by the admission of the State’s attorney: "TEA would treat the three former charter schools as non-revoked if they win this appeal, as long as they are otherwise eligible to hold a charter."

The attorneys anticipate a ruling between 90-120 days - likely in early January - but the court is not beholden to a particular deadline.

Notwithstanding this pending litigation, all three charter charters were formally revoked by TEA in 2014 when the agency exercised its lawful authority as a government agency to supersede the district court’s injunction. Consequently, none of the affected charter holders are currently operating a charter school.

All briefing filed in the case can be found on the court’s website, including the amicus curiae brief filed by the Texas Charter Schools Association.