By: Justin Parmann, guardian of a KIPP Austin Comunidad student Justin's grandson proudly holds a KIPP sign at the 2015 TX Charter Revolution rally at the Capitol.

My wife and I became the guardians of her two amazing grandsons a little more than three years ago. They were almost one- and four-years old at that time. In their short lives, the boys experienced a lot of instability and uncertainty. It is because of this that our goal has always been to provide a stable environment.

Quality education and matriculating to college is one way we wanted to help the boys to grow and develop into successful men. My wife and I both understand and appreciate the importance of a college education. We began to work with the kids at home introducing many of the pre-K topics knowing it would help make school a positive experience. We were excited that our local public elementary was in our neighborhood which would allow us to walk to ride our bikes to school with the boys each day. Unfortunately the learning environment at our local school was anything but supportive.

The teacher’s approach to our oldest already knowing his shapes, colors, numbers, and letters was to ostracize him by having him sit in the corner and not be taught. This was so the rest of the class could catch up. But it marked him for bullying. He would come home so sad because other students would write on his clothes, cut his clothes with scissors and even pour glue on him. When our concerns were excused as “normal kid things”, we moved it up the ladder. Little did we know this would mark him from the top on down. The school did nothing. 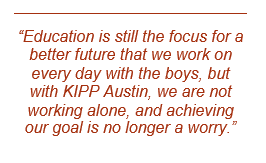 The disregard for his education from the educators was inexcusable and it set us back even further when it came to his life threatening peanut allergy. We got promises that they would hand out all snacks, but still putting a peanut snack in his backpack. We finally had to keep him from participating in school parties because they refused to see the severity of his condition. The final straw was when he was taken on a field trip without his emergency bag containing lifesaving medications and his inhaler.

After the repeated disappointments with our neighborhood public elementary we began actively looking for alternatives. With private schools not being an affordable option we began to investigate public charter schools. Neither of us had any experience with public charter schools so we began to read everything we could about the various choices in Austin. Using social media we reached out to other parents and visited our top school choices.

In the end, the right choice for us was KIPP Austin Comunidad. We loved the immersion dual language program. Plus the passion and energy of the staff was contagious. The KIPP motto of "To and Through College" is something KIPP Austin Comunidad lives every day. College is a natural part of everything they do -- from classroom decorations, to the names of their homeroom classes, field lessons, class projects, spirit days and more. The expectations of students at KIPP are high. The days are long and it requires a commitment from the entire family. The effort your family puts in is exceeded by the effort the teachers and staff put forth. The teachers keep in consistent contact through email, text, and phone calls; as we discuss good and bad behaviors, and work together to help him overcome different challenges.

Early in his kindergarten year his ADHD became apparent. Beyond working with our pediatrician, our amazing team of kinder teachers jointly did research with us on additional things we could do in the classroom to help him stay focused, and implemented them quickly. The business manager for the school consulted with us regularly on continuous improvements to their policies and procedures they were implementing around food allergies. The examples of positive, constructive engagements with myself and other parents are just too numerous to list.

The results of being challenged and supported by our charter school are amazing. After his first month, he was switching between Spanish and English with ease, and his confidence in both languages has continued to soar for the last two years. He is preparing to start second grade now. Next year, we are excited our youngest will join him as a kindergartner at KIPP Austin Comunidad. Education is still the focus for a better future that we work on every day with the boys, but with KIPP Austin, we are not working alone and achieving our goal is no longer a worry.